The Fall Fish Festival, on October 7 and 8, 2017, at the Taylor Creek Visitors' Center (see map, below), focuses on a variety of fish species that live in Lake Tahoe and its rivers. In addition to the Kokanee, these species include the federally threatened Lahontan cutthroat trout and little-know smaller fish, such as speckled dace.

The visitor center is located three miles north of South Lake Tahoe on Highway 89. Join the fun and participate in this free family event which has become one of the most fascinating educational and wildlife viewing events in Northern California.

The festival encourages participation by children and their parents in a wide variety of educational and entertaining activities, that over the years has included:

​Ever wonder how the Kokanee Salmon got their name? The American Indians living along the Fraser River in Canada gave the Kokanee its name. Kokanee means “red fish.” They are non-anadromous salmon meaning that they live their entire lives in fresh water. Kokanee are much smaller than ocean going salmon due to limited sources of food in fresh water lakes. The average size of an adult is 14 inches.

Did you know the Kokanee Salmon are not indigenous to Lake Tahoe? Kokanee were “accidentally” introduced into Lake Tahoe in 1944 from holding ponds that overflowed at the old Tahoe City Fish Hatchery. Three years after their accidental introduction the salmon returned to Tahoe City to spawn. Knowing that the Kokanee would survive in Lake Tahoe, it was decided that the hatchery would do a yearly planting of fingerlings in the tributary streams. These plantings began in 1949. Today, California Department of Fish and Game continues to plant fingerlings in Taylor Creek to maintain a healthy population. Kokanee Salmon are a land-locked form of the Sockeye Salmon that are native to the marine and fresh waters of the Pacific Northwest.

What to Do When You See a Bear 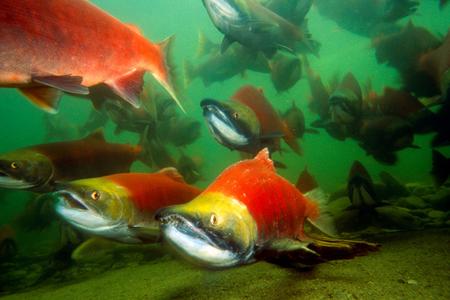 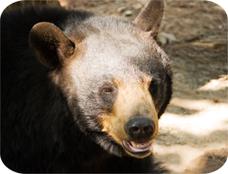